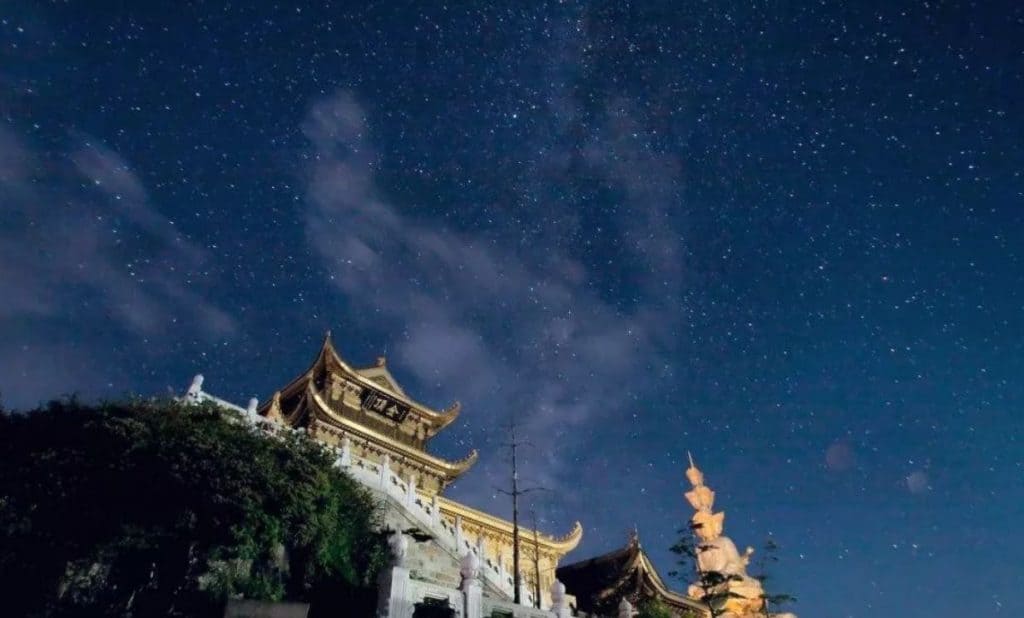 One of the best things about living in Chengdu, is how easy it is to hop on a train or a bus, and in a few hours be somewhere beautiful. Western Sichuan has some stunning hikes, and scenic spots – and whilst some of them require long bus rides through hilly highways, here are some places to escape to, just for the day;

Leshan is best known for its Giant Buddha, but it’s also home to interesting temples and an epic local food scene. Set off from Chengdu as early as possible so you can explore the Giant Buddha scenic area at a leisurely pace and still have time to chow down on some local beef. By car, Leshan is about two hours away from Chengdu. Tickets to the Giant Buddha park are 80RMB, and 40RMB  for kids. 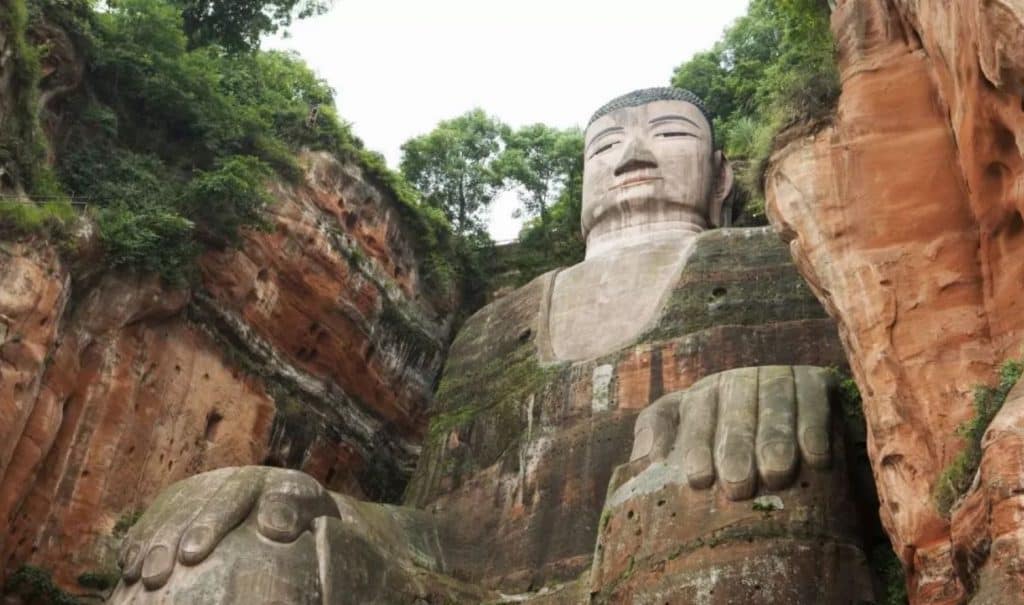 Once you make it to the recently restored Giant Buddha, you will have to queue for a while to walk down the narrow path from the top to the bottom – on weekends this can take hours. If you want an unobstructed view, hop on one of the tourist boats over the river. After you’ve got your pictures with the big guy, spend some time exploring the temples and gardens inside the park. 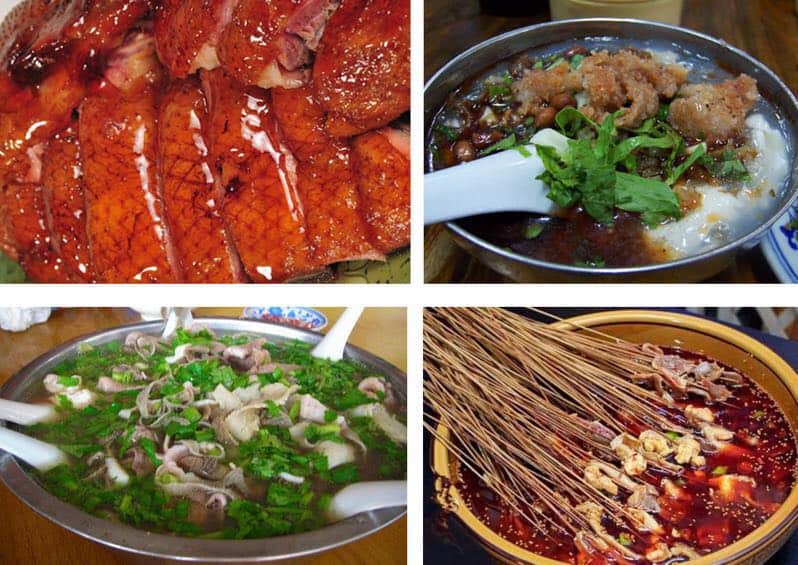 The most hassle-free way is to get the fast train from Chengdu East Railway Station to Leshan and back again, which costs 86RMB/54RMB (1st class/2nd class) each way. It’s best to book ahead, and make sure you bring your passport.

Located outside Chengdu in Sichuan province, this glorious mountain is  home to China’s very first Buddhist temple that was built in the first century CE at the summit of Mt. Emei. At an altitude of 3,000 meters, the Huazang temple is both tremendously beautiful and historically significant.

Mt Emei is home to around 30 temples that vary in historic age and this is what resulted in the scenic areas and nearby Leshan Buddha becoming a combined UNESCO World Heritage Site in 1996. In order for you to experience this beautiful site to its full potential, we recommend taking at least one full day to explore!

One must-see spot along your travels is the Baoguo Temple upon which is a ticket office and a tourist centre, with sightseeing buses that can take you to different destinations along the mountain. The prices of these bus journeys do vary depending on where you are wanting to travel but the prices vary from around RMB185 per person (peak-time) and RMB110 (off-season). 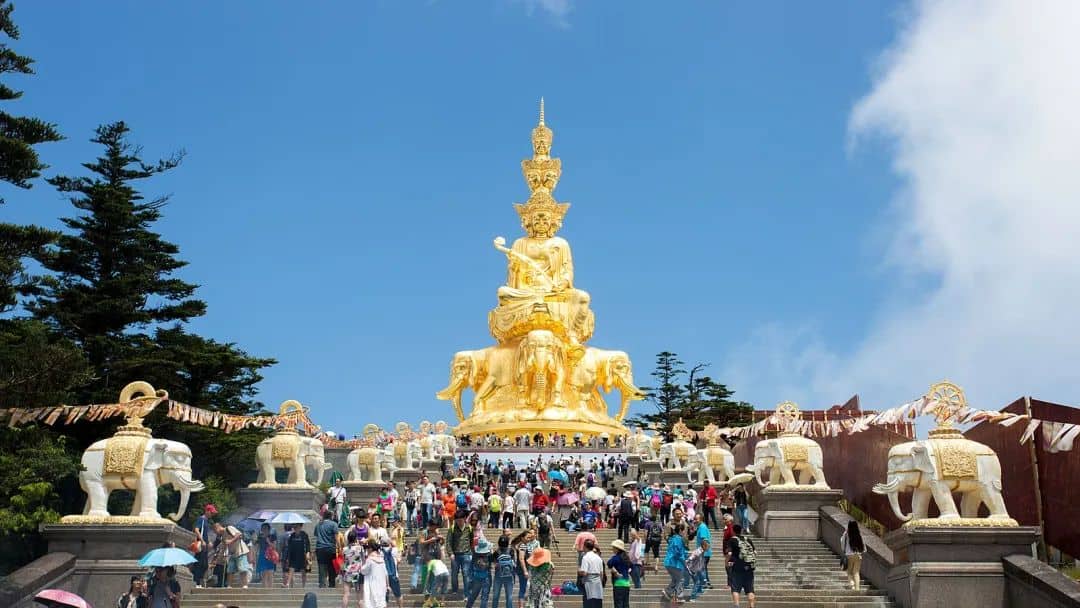 Very near to the Baoguo Temple is the natural hot springs where travellers can immerse themselves in the rich water that the mountain provides. Along the temple area are different resorts and hotels that can offer swimming as well as yoga and spa treatments. It is also worth noting that the Lingxiu hot spring is open until midnight where guests can enter until 11pm. With the ticket price only RMB138 it is a great way for guests and travellers to unwind after a hard day of exploring the mountain surroundings.

You can get a train from Chengdu East Railway Station to Emeishan for 104RMB/65RMB (1st class/2nd class). The new Emei Shan train station is about a 50-minute walk from the entrance of the park, and the station is also connected by bus to Baoguo temple, which is the departing point for buses going up Mount Emei and also the starting point for trekking.

Driving from the Sichuan capital to Mt. Emei will take roughly three hours (longer on holiday weekends). Hiring a private car and driver is the most expensive option but might be ideal for a group of up to seven people if comfort and convenience are a top priority.

You can also get a coach to Emei Town from Chengdu East Railway Station Bus Passenger Transport Station (take Metro Line 7 to Chengdu East Bus Station Stop). The coach costs 43RMB each way and leaves at 7:20 am, 10:00 am, 15:00 am, and 16:20 am every day, arriving at Emei Town Main Bus Station.

There are also many local and tourist buses that take travelers from Emeishan Station to the major tourist starting points. In 30 minutes, the number 12 bus will take you to Baoguo Temple at the eastern foot of the mountain. A taxi will make the same trip in ten minutes.

The next day out takes you around Chengdu, literally! At the beginning of the year, 99% of the full route of the 100 km-long greenway circling Chengdu opened to the public. The greenway is a loop not accessible to cars running parallel with the fourth ring road (called Chengdu Ring Expressway 成都绕城高速), connecting 78 bridges and 121 eco-parks, they can be accessed from several points. The greenway crossing Tianfu Avenue next to Jincheng park at Global Center is probably the most known access point. It’s really flat – but has total uphill paths of about 20km, and downhills of about about 20km – and the remaining 60km very flat.

Since the greenway opened, it has become as top destination for Chengdu locals looking for leisure and exercise, and already gets quite crowded on weekends and holidays. Most people use shared bikes, but if you plan to do the full loop, they can be rented at several spots along the greenway like Feideng Station (must book in advance during busy period). Lots of people sell drinks and snacks along the trail, and now and then have a basic medic station. It is advisable to bring water with you though as sometimes the vending machines don’t work.

The next activity takes you around Chengdu, literally! At the beginning of the year, 99% of the full route of the 100 km-long greenway encircling Chengdu opened to the public. The greenway is a loop not accessible to cars running parallel with 3.5 ring road (or Chengdu Ring Expressway 成都绕城高速), connecting 78 bridges and 121 eco-parks, they can be accessed from several points. The uphill road is about 20km, the downhill road is about 20km, and the flat road is about 60km.

Since the greenway opened, it has risen as top destinations for Chengdu locals looking for leisure and exercise, already getting crowded on weekends and holidays. Most people use shared bikes, though if you plan to make it a longer trip and want a better bicycle, they can be rented at several spots along the greenway like Feideng Station (must book in advance during busy days). Lots of people sell drinks and snacks along the trail, and now and then got a basic medic post.

If you don’t plan to do the whole loop, we would recommend these routes:

‘Flower town’ as it’s known locally, is a group of villages that used to sell flowers, but has slowly become a mini-getaway for city dwellers looking to experience the countryside, but still sleep in the comfort of their own beds at the end of the day. The narrow, hilly roads make a welcome change from Chengdu’s grey concrete highways and for a few hours you can get lost in the idea that you’re outside of the third ring road.

There are plenty of little cafes, bars, and restaurants where you can relax and enjoy the relative calm of the town, or alternatively rent bikes. There are lots of BBQ restaurants, to invite big groups to, with free flow beer, so gather your friends! Across from the Modern Art Museum, you can also buy cheap flowers and plants at the market. 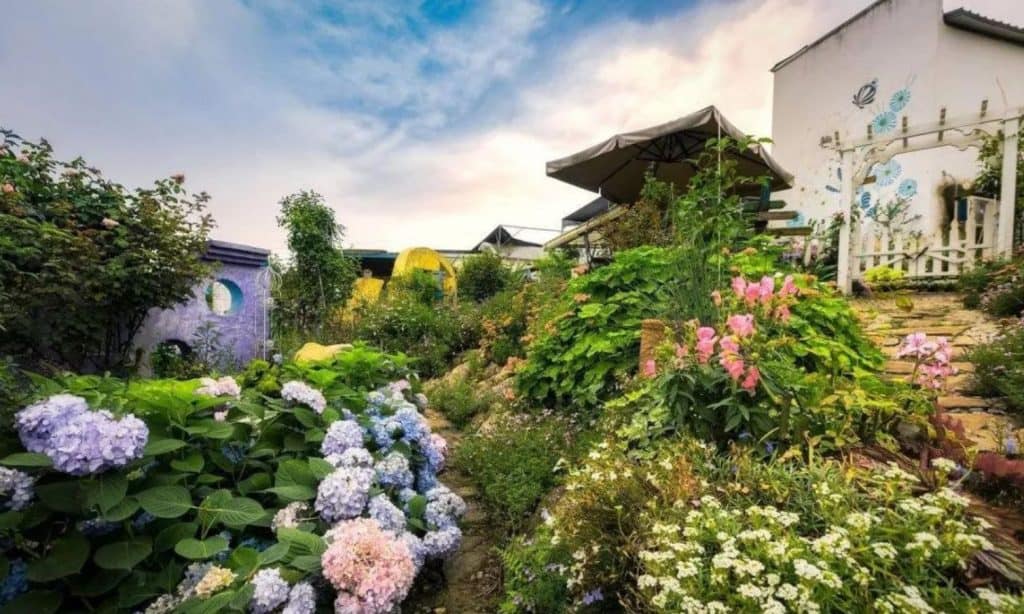 Flower town is technically in Chengdu, so it’s a doddle to get to. A DiDi or taxi is the easiest way (30-50RMB) – It’s pronounced sān shèng huā xiāng 三圣花乡. There are also buses (the 899 from Chengdong Passenger Transport Center to Louwailou Stop) or Metro line 2 to 红河地铁站 Honghe Station Exit A1.

Huanglongxi is an ‘ancient town’ with a history that dates back to the Han Dynasty. Located in nearby Shuangliu County to the southeast of Chengdu, Huanglongxi is known for its natural scenery and ‘ancient architecture’. The town has seven ancient streets which were constructed during the Ming and Qing Dynasties… or so they say. 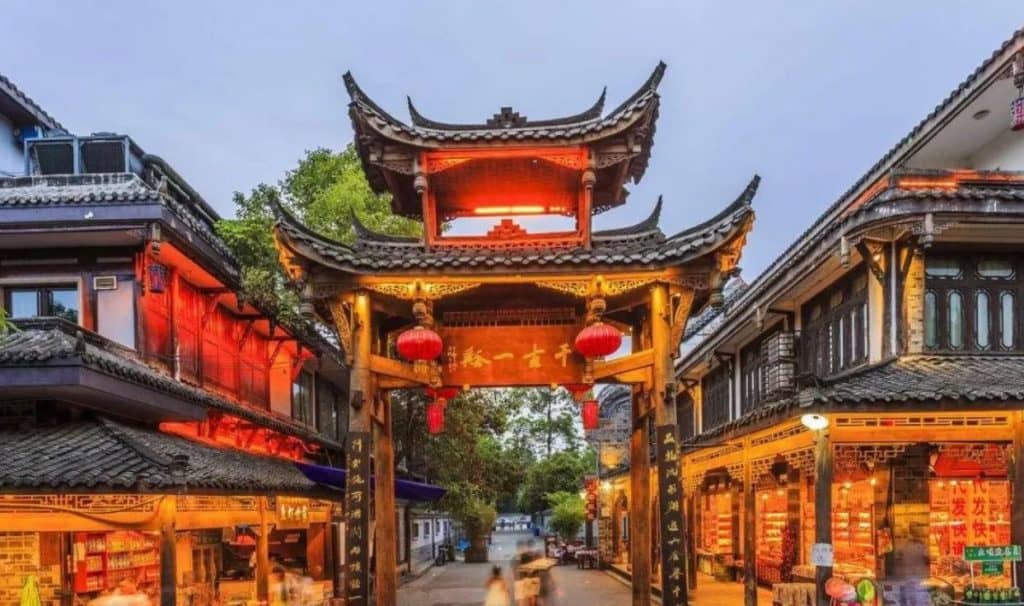 There are temples along the town’s central street, or you can take a river cruise and admire the stilt houses and beautiful scenery. It has recently been used to as the backdrop in many historical dramas – so prepare to fend off teenagers in hanfu. You can also play mahjong along the river or go fishing.

Take the bus from Chengdu East Railway Station Bus Passenger Transport Station. Buses leave every 30-60 minutes until around 6:30pm. The journey to Huanglongxi takes about ninety minutes and it costs 16RMB each way.

Qingchengshan is one of the ancient ‘cradles’ of Taoism in China. The mountain area contain Taoist and Buddhist temples as you ascend to the peak, and it’s a really nice day out. Skip the front mountain, and head to 后山 – the back mountain, which is much quieter. The entrance fee for Qingchengshan on its own is 78RMB (half price with a student card) and the combined ticket for both mountains and the Dujiangyan irrigation system is 156RMB. 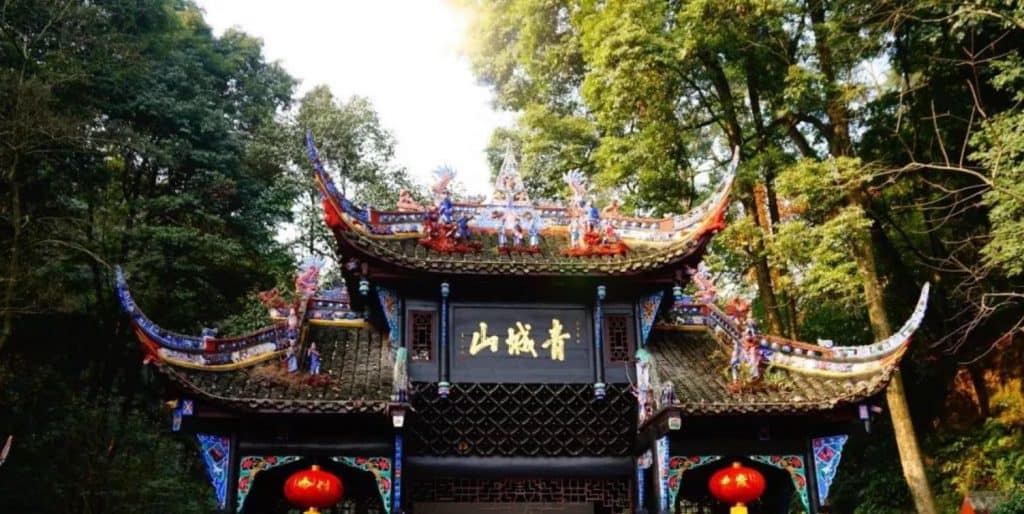 It takes around 3 hours to get to Laojun temple at the summit of the mountain, with the cable car (80RMB) – but if you carry on walking, instead of taking the cable car back down, it’s a lovely route and will take you back to where you started. If you stay in the area overnight be sure to check out the Dujiangyan irrigation system nearby.

Take the fast train from Xipu Train Station (Metro line 2) to Qingchengshan Highspeed Station which takes roughly 35 minutes and costs 10RMB each way. Remember you will need your passport, both to book and to take the train.  At Qingchengshan train station, take bus number 101 or 102 to get to the start of the walking trails.

Alternatively, you can get a bus to Qingchengshan from the Wide and Narrow Allies 宽窄巷子which takes 1-2 hours, and also stops at Dujiangyan bus station. The buses leave at every hour, and especially frequently from 7 am to 8 am every day. Buses from Kuanzhaixiangzi will stop directly at the parking lot of Qingchengshan ticket office.

Roughly 20km away from downtown Chengdu, this old town is home to the largest Hakka population in Sichuan (90% of the town’s population is Hakka), and the town seeks to preserve this culture. Walking down the town’s main street you can see some fantastic examples of traditional Chinese architecture.

Luodai has a Hakka museum and a spacious park dotted with teahouses. The four guild halls which date all the way back to the Qing Dynasty. 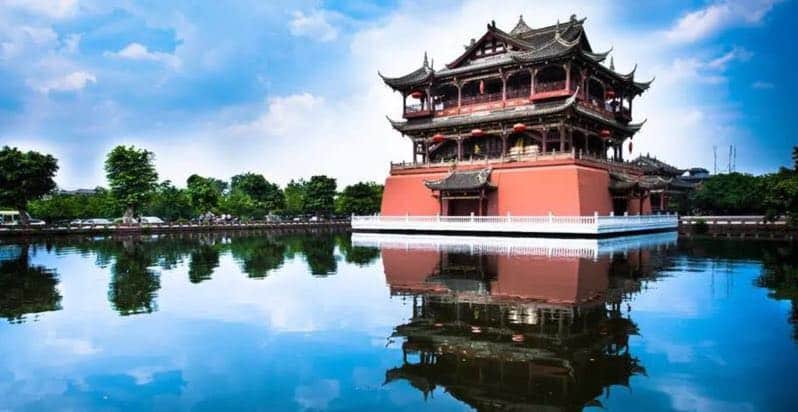 You can take bus line 1024 from Xihe station 西河地铁站 (Metro line 4 to Xihe Station) to Luodai or catch a bus from Xinnanmen Bus Station straight to Luodai Bus Passenger Transport Center Ancient Town. It will take roughly 1h 45 min to get the scenic spots.

Situated in a 4A graded tourist area (!!!!!), Xiling Canyon is famous for skiing in the winter and rafting in the summer. The course a few hours to navigate, with drops of up to 100 meters along the way, but it’s mostly quite a tame affair. The rafts can fit 2 people, prices vary from 78 to 128RMB per adult. Opening time: 9am – 6pm.

The Buddhist Wenshu Monastery was constructed in 1961 and consists of five separate temples built from wood and stone. It has ten statues of Buddhist guardian gods and more than 100 sculptures of Buddhas.

Take Metro Line 1 and get off at the stop Wenshu Monastery.