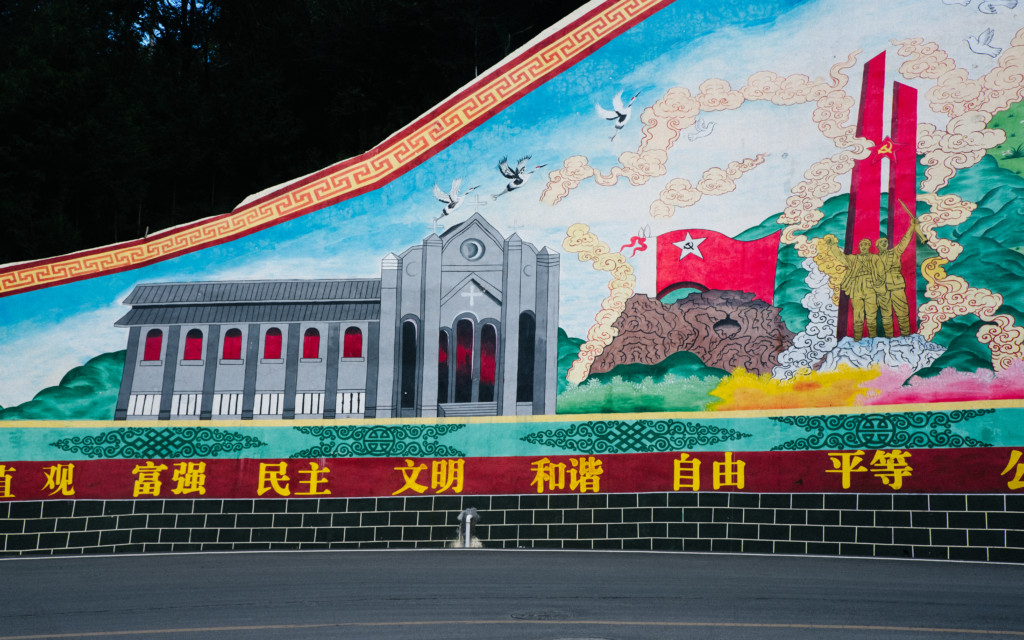 The teller at the bus station told me the only route available would be to first head to Xiaojin, a small city near the Siguniang (Four Sisters) mountain range, then take a local bus the rest of the way at 9:00 am the next morning. For the sake of making headway I decided to go for it and grabbed a ticket, and in the end was very happy that I did so.

Located on the eastern edge of the Qinghai-Tibetan Plateau 60km west of Rilong, Xiaojin is a rustic city painted the hue of light yellow that straddles the cusp of a deep gorge and is surrounded by high peaks reaching over 4500m on all sides.

While most information on the internet casts the smaller towns of western Sichuan in a bad light, this place is quite the opposite and seems like a welcomed alternative to most of the more crowded tourist destinations nearby.

With the Tibetan, Qiang, and Hui minorities accounting for 52% of it’s main residents, Xiaojin is a charming city with vibrant street scenes, bustling markets, and opportunities for adventure around each narrow curve.

In the center of the city, there is an impressive communist memorial that overlooks the gorge, and at the lower levels of the city there is a beautiful river that winds in and out though the houses. Both are a must see if you find yourself passing though.

While in Xiaojin, I suggest you spend your time navigating it’s narrow walkways and soaking up the scenic areas along the upper portion of the city. If you are feeling really adventurous, hire a vehicle at the bus station and travel into one of the many valleys that surround the main city, you wont be let down.

Go to ChaDianzi bus station 茶店子汽车客运站 and get on a bus bound for Xiaojin 小金县. At the time of this writing, they departed at 7am and 12noon. De-bus at Rilong 日隆. Ask the attendant to let you know when you arrive.

Most guesthouses and hotels in the area are owned by locals who only speak Tibetan and Chinese. However most have licenses to host foreigners so you shouldn’t have a problem finding somewhere to stay. We stayed at the Jin Cheng Hotel 金城酒店 – it was pretty cheap and they were friendly.

Most people say the climate was best in autumn or late spring. The weather can be very dry during the summer months, but also has the capacity to change dramatically without much warning. Western Sichuan is always unpredictable, so dress accordingly.

Jake is an American photographer based in Chengdu. Inspired to pick up the camera by the scenes that surround his daily life, he enjoys documenting the scenes and characters that present themselves in modern day China as well as working on commerical shoots.