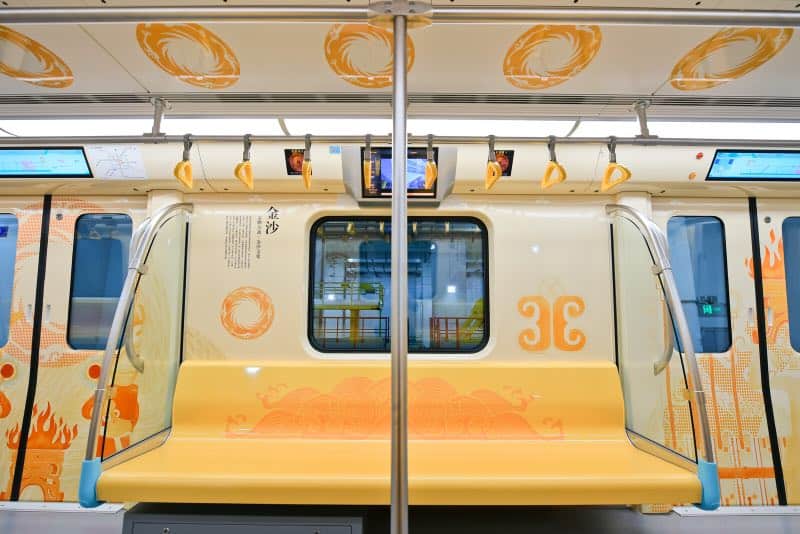 Line 7 is the first circular metro line in Chengdu which uses a single-loop operating system. Spanning 38.6 kilometres the line will run between the city centre’s 2nd and 3rd ring roads.

The line has a total of 31 stations, 8 of these are transfer stations to existing metro lines with more proposed to be added in the future. Line 7 will connect Chengdu’s major transportation hubs including: North Railway Station, East Chengdu Railway Station, and South Railway Station and Chadianzi Bus Station.

The new metro vehicles are composed of 6 sections A type vehicles, which will be the largest on the Chengdu metro. With a maximum operating speed of 80 Km/hr. It will arrive at stations at just 3 minutes and 30 second intervals, making Line 7 30% faster than any other existing line.

The first train will depart the station daily at 06.15am and close at 22.55pm. It’s still in a triall phase at the moment, so this may change as they calculate train flow.

As with all standard metro pricing, tickets start at 2RMB and should decrease over time due to the increased number of transfer stations.

All the stations have automatic ticketing machines that now contain the mobile payment function – Alipay and WeChat pay are now fully functional at all line 7 stations. The machine simply scans your payment QR code –  no more fishing around for coins.