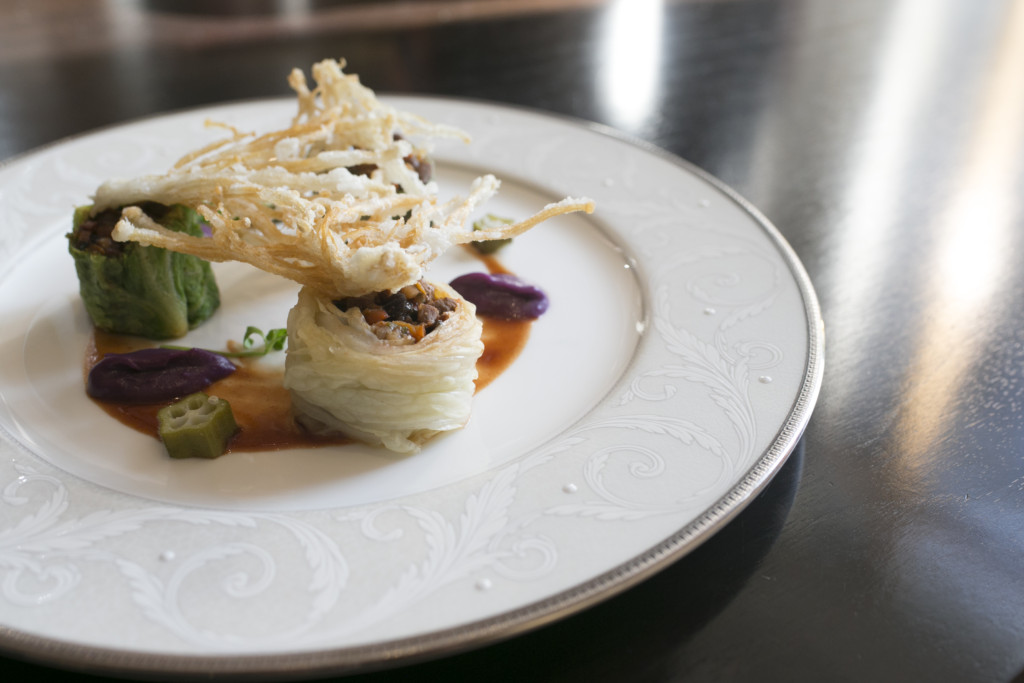 The Waldorf Astoria Shanghai is one of the top destinations in Shanghai for those seeking luxury and an unbeatable quality of service. For this reason, they boast a huge selection of awards such as a spot on Travel and Leisure’s top ten luxury hotel and why City Traveller called them the most popular luxury hotel. The Waldorf have launched the ‘Taste of Waldorf Astoria Unforgettable Experiences’, a collection of high end location specific packages that represent the unique gastronomic experiences available of that location. Recently, the Taste of Waldorf Unforgettable Experiences came to Waldorf Astoria Shanghai on the Bund, and we were lucky enough to take part in an event that certainly lived up to their high standards of dining.

We started with a spa experience in the Waldorf Astoria Spa which offers a variety of treatments, and exclusive use of the finest products and most qualified therapists, and is guaranteed to leave you feeling rejuvenated. The perfect cure to even the most severe jet lag!  In the evening guests may enjoy a pre-dinner cocktail in the Long Bar followed by dinner at Pelham’s.  You can’t talk about the Waldorf Astoria without mentioning the Waldorf’s world famous Long Bar.  When the Shanghai Club opened 105 years ago it was reported to have the longest bar in the world, coming in at a staggering 111 feet of solid mahogany.  A seat at the east end, facing the breath-taking views of the Huangpu saluted your arrival at the top of the social ladder.  One hundred years later it might no longer hold the title of ‘longest bar in the world’, however, the nostalgia and the unmatched glamour live on following the extensive refurbishment which saw the marble columns, stained glass windows, detailed wall panelling and much, much more, flawlessly reproduced from archived photos.  Another aspect of the Waldorf Long Bar that adds to it’s old glamour feel and sets the Waldorf apart as one of, if not the, most elegant venues in town is the Oyster Bar.  Here you can order baked Fitzpatrick, Rockefeller oysters and a range of fresh oysters that are flown in from France at least twice a week.  To go with these, why not have the eponymous Waldorf salad which was, of course, created in the Waldorf. Despite not having the global fame of the Long Bar, the Pelham’s is very much in keeping with the atmosphere and quality of the Waldorf.  This modern French restaurant has recently released a completely new menu lovingly created by Chef Jean-Philippe Dupas.  You can choose anything on the menu and feel confident that you will be having an unforgettable dining tour de force. To eat here as part of this event is an experience that I will always remember and is easily one of the best meals, both visually and gastronomically.

The next day, as part of the ‘Taste of Waldorf Astoria Unforgettable Experience’, we were introduced to the Waldorf Astoria signature dishes.  The first was this year’s Taste of Waldorf Astoria winning dish, the Jing Roll, created by Waldorf Astoria Beijing Master Chef, Benoit Chargy, and Chef Erik Bruner-Yang.  The Jing Roll is a Napa cabbage wagyu beef roll with black mushroom, hoisin sauce, salted duck eggs and purple sweet potato (…. delicious!). This definitely gave us an indication of the level of skill that went into the food that we were going to play a hand in creating!

Of course, the highlight of the event was joining the esteemed chefs, making Xiao Long Bao together and bringing our ‘A’ game into play.  The star chefs who stepped into the Waldorf Astoria Shanghai kitchen (which is used to housing world class chefs on a daily basis) were Chef Benoit Chargy from the Waldorf Astoria Beijing, Chef Jan Van Dyk from the Waldorf Astoria Shanghai on the Bund and Chef Erik Bruner-Yang, a James Beard Foundation Rising Star Chef of the Year finalist.  Guests were lucky enough to taste the dishes the chefs prepared – which was fortunate as the presentation was so spectacular that everyone found their mouths watering.  One of the triumphs was a Xiao Long Bao, created by Chef Jan as a finalist for the 2015 Taste of Waldorf Astoria competition, which is a skilful marriage of chicken, pork, foie gras and truffle.  In one word, it was exquisite.  You can immediately savour the quality of the ingredients that they exclusively use, and cannot fail to admire the care taken to ensure that the blend of flavours walks that fine line between powerful and overpowering.  As if that were not enough, we were then were treated to 2015’s winner, the ‘Celery Risotto alla Waldorf’, which was a further testament to the skill and commitment of all the chefs who take part in these events and work in the Waldorf kitchens around the world.  It was truly an honour and privilege to take part in this gastronomic feast.

Though, of course, the focus is much on the culinary experience of the event it goes without saying that to stay in the Waldorf Astoria Shanghai is a notable experience of its own merit. The Waldorf Astoria refers to its guestrooms and suites as providing unforgettable experiences and they certainly live up to their claim.  With over 250 rooms located in two connected buildings, the century-old Waldorf Astoria Shanghai on the Bund, once the famed Shanghai Club, was restored to its former glory in impeccable detail in 2010. As well as the new annex tower, the hotel is a true reflection of the heritage of its location.  The Waldorf Astoria oozes understated class from the moment you walk into the lobby until you the moment you leave.  They offer truly personalised and luxury service to all their guests, something you notice from the outset as the Waldorf Astoria has replaced the traditional reception desk with a 24-hour butler service to help check you in and cater for your every need.  The Waldorf will never say no.

The feeling of heightened luxury continues when you are escorted to your guestroom.  The rooms are so spacious and furnished to such a high quality that you could be forgiven for assuming you’d been taken to the presidential suite by mistake. No matter which way you face, the splendid windows make you privy to unbelievable views of the Shanghai skyline, which also ensure that the rooms feel incredibly bright and airy.  With state of the art entertainment, complimentary WIFI and walk-in wardrobes you will soon find yourself wishing you could stay here forever.

The wonder of the Long Bar can easily be matched by the variety of restaurants and patisseries that the Waldorf has to offer.  The Wei Jing Ge menu was created by Chef Sam Yuan and presents a Cantonese Fruit Infusion inspired by the fresh and tropical flavours of a Chinese summer.  The accommodating nature of the staff that you experience in the hotel is continued in Wei Jing Ge where the atmosphere is that of luxury and a high dining experience.  However, if you are looking for a more relaxed dining experience, then Peacock Alley will be where you will want to head.  It specialises in quick and informal meals and afternoon tea, whilst still maintaining the extremely high standard that one comes to expect from the Waldorf.   Or, if you are in a well-deserved indulgent mood, why not try the world famous Sunday Waldorf Champagne Brunch, which makes the Grand Brasserie arguably one of the top destinations in the whole of Shanghai.

Iconic dishes such as Eggs Benedict and Red Velvet Cake have placed The Waldorf firmly in the centre of culinary history and, in celebration of this, the brand introduced the ‘Taste of Waldorf’ competition  discover the Waldorf’s next signature dish.  Five James Beard Foundation’s Rising Star Chefs were teamed up with five of Waldorf Astoria’s current “Master Chefs” from around the world, and each duo was invited to create their own version of the next ‘Taste of Waldorf’, with the winner announced this February in New York City. Now, at select locations worldwide, guests can choose from a collection of high end gastronomic packages that will launch you on your own bespoke culinary adventures.

Taste of Waldorf Astoria is in culinary partnership with The James Beard Foundation who are committed to providing support for the most talented chefs throughout their professional journey, to help ensure that any chef with the talent has the opportunity to succeed.