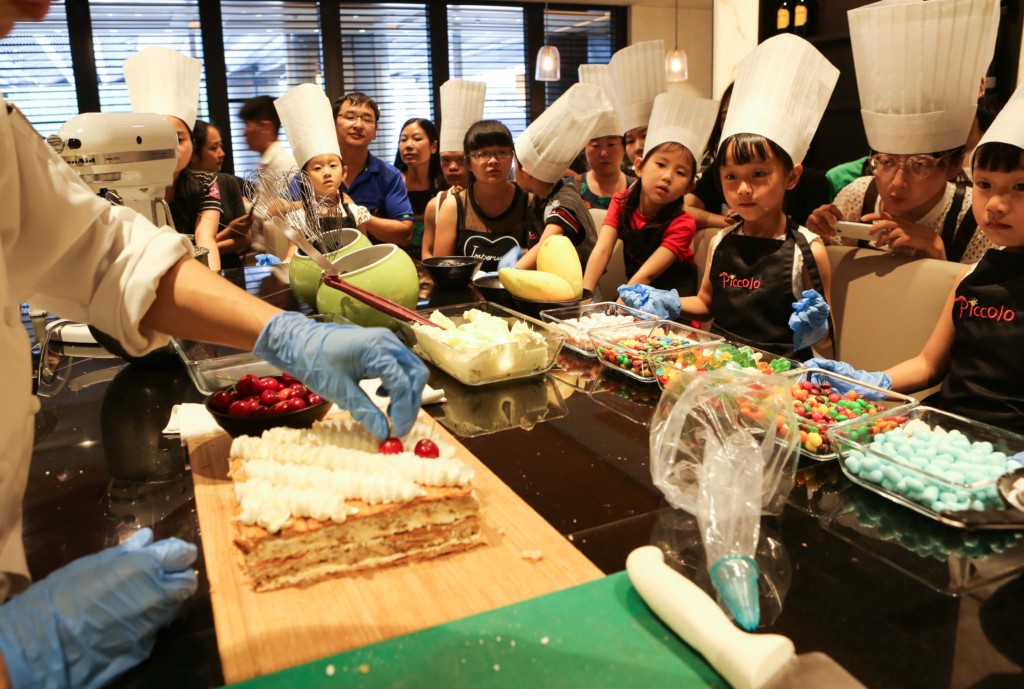 The Temple House is proud to present an exclusive Diane von Furstenberg (DVF) Afternoon Tea and Spa package from 17 June to 16 July, inspired by DVF iconic wrap dress with chain link motif – “Love Story of DVF”. Guests can enjoy a tea set that captures the flawless love and care of the DVF brand, in between timelessly glamorous and classic patterns. The afternoon tea is priced at 268RMB for two, and served daily from 2:30pm to 5:30pm at The Temple Cafe. Guests indulging in the set will also receive an exclusive gift package and gift voucher.

To make reservations at The Temple Café, please call +86 28 6297 4191 or email thetemplecafe@thetemplehousehotel.com.

The Longest Napoleon Cake in Chengdu

On Children’s Day, Niccolo Chengdu presented the longest Napoleon cake in the city at Niccolo Kitchen. In addition to presenting the 80-meter-long Napoleon cake, which was made of 3,600 pieces of small cakes, the pastry chef of Niccolo also held a baking class for children, telling stories of Napoleon cake and teaching them to make their own cakes. They also invited several trainees from WABC to attend this event and donated a portion of the profits to the organization. The event was very successful and the majority of cakes were sold.

We believe that health is not just for those who go to the gym and eat salad every day, health is for everyone. It’s recommended that you walk 10,000 steps a day for a healthy lifestyle. We wanna reward those who prioritise a healthy living. Search for 微信运动 [weixin yundong] on WeChat, and let your phone count your steps. Show us your results from the past seven days, and if you’ve reached 10,000 steps in a day during that time, we will reward you with a free smoothie. If you’ve taken 20,000 steps in a day over the last seven days, then your next Power Bowl is on the house. (Rewards are limited to one per customer per day, and limited to 20 customers daily. Campaign ends 1st August.)

Situated at the sky level – the pinnacle 38th Floor of the Ascott Raffles City Chengdu, with spectacular views of the downtown Chengdu skyline – the all new Different Tastes Restaurant and Level 38 Lounge offers an authentic gastronomic and entertainment experience. Enjoy classic Singaporean dishes as well as a bevy of signature western delights, whipped up by their team of experienced chefs, while being feted by the signature Ascott “Home away from Home” service. To cap off a lovely evening, sit back in the comforts of their lounge bar and sip on evening cocktails in a perfect setting of elegance meeting low key sophistication.

The 3-day 2016 Global Innovation and Entrepreneurship Fair (GIEF) was concluded successfully on June 26th. According to a press conference hosted by the city government’s Information Office on June 26th, a total of 18 conferences, forums and/or programs were convened during the Fair, with an attendance of about 70,000. Covering an area for exhibition amounting to 15,000 square meters, the event attracted about 300 exhibitors from across the world, which showcased their projects and products involving the founding of entrepreneurial teams, innovation of technology, incubation of creative ideas, venture capital and financing, launching of products, product marketing and branding, as well as how to take a company public.

60 multinationals including Google, GE, Tesla, 50 innovation and entrepreneurship (I&E) enterprises in China, and 200 leading I&E enterprises showed their latest technology and products during the event.

On June 18th, Chengdu hosted its first official Fête de la Musique, featuring 3 French bands – Nach, Success and Last Train – and more than 30 local bands and musicians at iBOX, Evergrande Plaza, CapitaMall Tianfu, as well as at Sofitel, The Abbaye, The Beer Nest 2, and more public spots all around the city. In the past 40 years, Fête de la Musique has developed into one of the world’s biggest non-commercial music festival and its spirit to provide music for all is now further enriching Chengdu’s thriving music scene.

For more than two years, the Chengdu Entrepreneurship Meetup has been held every 3rd Wednesday of the month starting at 7:30pm. It’s a free event for anybody interested in entrepreneurship and operating a business and includes presentations, idea pitches, Q&A and networking. Feel free to join and hear the stories of trailblazing and building businesses in Chengdu! Organized every 3rd Wednesday of the month @ The Beer Nest II, Brewpub & Kitchen.

From June 5th till August 5th, the exhibition titled Treasures of Romania in Sichuan Museum are displaying 445 pieces/sets of Romanian cultural treasures made from the prehistoric times to the late 18th century, including the ceramic figurine The Thinker and bronze statue of the Goddess Venus. Offered by nearly 30 museums and art galleries of Romania, more than half of the exhibits, including stoneware, pottery, gold and silverware, glassware, woodwork, frescoes, manuscripts and textiles, are Romania’s national treasures and some of them haven’t even been showcased outside Romania. Entry: Free